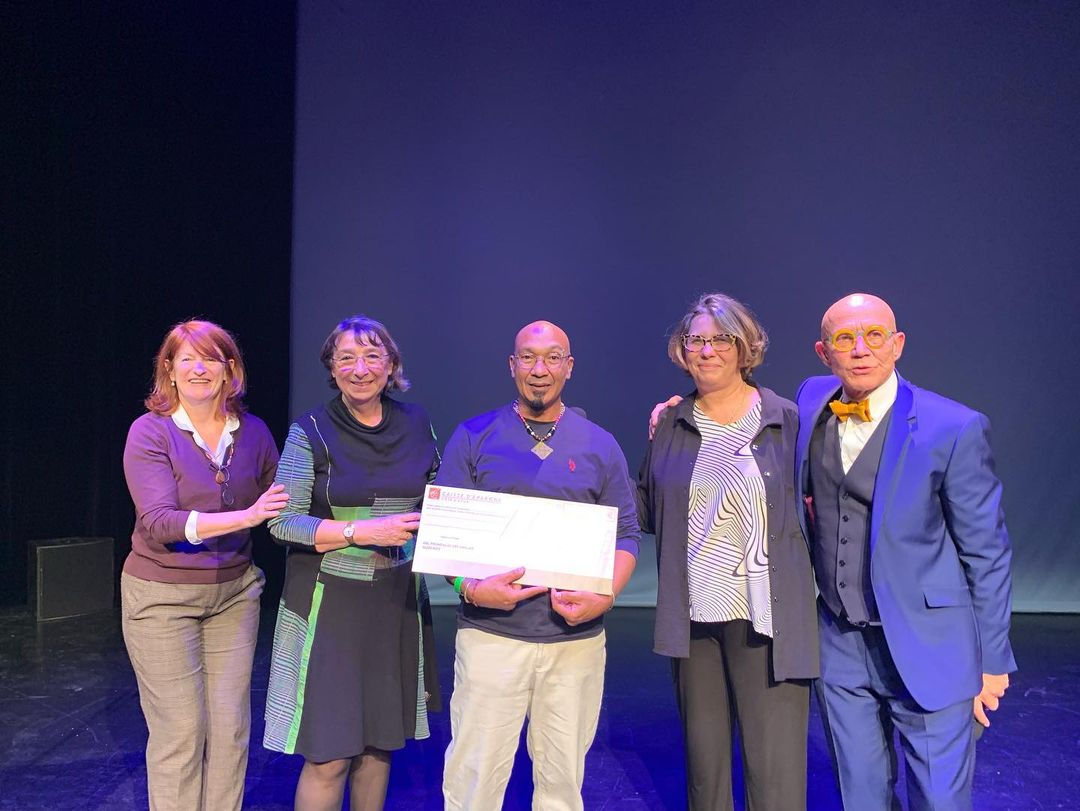 On December 4th at 8 p.m., the reward ceremony for the 2021 OVNi Festival took place at the Théâtre National de Nice.

Two prizes rewarded the best artists in the selection. Firstly, the Grand OVNi prize relating to artists exhibited during the Rencontres OVNi at the WindsoR hotel. Secondly, the Sud Emergence prize for young artists present at the West End hotel.

The ‘Grand OVNi’ prize, supported by the CHE -Centre de Haute Énergie- will be awarded to the winner of the « Rencontres OVNi ».

Supported by the CHE of Nice

Maksaens Denis was awarded for his installation entitled « Mes rêves » [My Dreams]. The room was transformed, for a moment, into a Freudian dream exploration. His three videos inviting us to discover the notion of dream-loops -messages from the mind that allow us to free our repressed impulses- seduced the festival-goers as well as the jury for its commitment.

The project was supported by Laboratorio Arts Contemporains and received the support of Fokal.

14 seconds of nothing, an eternity of everything.

« Corine Borgnet exhausts worlds to the point of tearing them apart, until boredom pierces a reference to the night, to insomnia, to idleness, that is to say to the desire for something else. […]

It is therefore not a question of a return of the repressed, but of a return outside of any psychic authority, such as an unattainable real that resurfaces, without our being aware of it, in boredom and absurdity, as in his videos filming « 14 seconds of nothing ».

It is undoubtedly a question of an obsessive gesture driven by an ingenuous desire to go around things, to unfold, in a Sisyphean and derisory way, an « eternity of everything ».

Once you reached the second floor, you were only a few steps away from Clara Thomine’s post-apocalyptic universe. Dressed in a bathrobe, the artist invited you to follow her in three reports filmed after the end of the world and highlighting « almost normal » situations. Tout doit disparaître [Everything must go], as you will have understood, mixed performance and video projections for the great pleasure of festival-goers!

Supported by the Caisse d’Epargne

At the end of a dark corridor, you enter a parallel universe, the one of Jeanne Marguerite. Following a residency in an EHPAD, the artist Léna Durr invites us to discover the daily life of the residents of a retirement home and to become aware of the rhythm and the boredom imposed by the passing of time in the image of a house that gradually empties itself. Seduced by the gentleness and accuracy of the work, the jury rewarded the artist for this installation full of tenderness.

Intrigued by an incandescent musical rhythm, you rush to Catalonia under Franco’s dictatorship to exalt the devil and evil. The artist’s immersive proposal in a poetic, plastic, sonic and visual maze, which is dear to this 12th century Spanish tradition, undoubtedly seduced the Sud Emergence jury.

The artist stood out for her original installation. Inspired by the Google T-rex game, Hayoung Kim proposed to festival-goers to follow the life story of Google Dinosaur going through an existential crisis. Spinning around in the limbo of non-existent internet connection, you could accompany the Google Chrome dinosaur into the confines of his room and into the video « The life story of GD ».