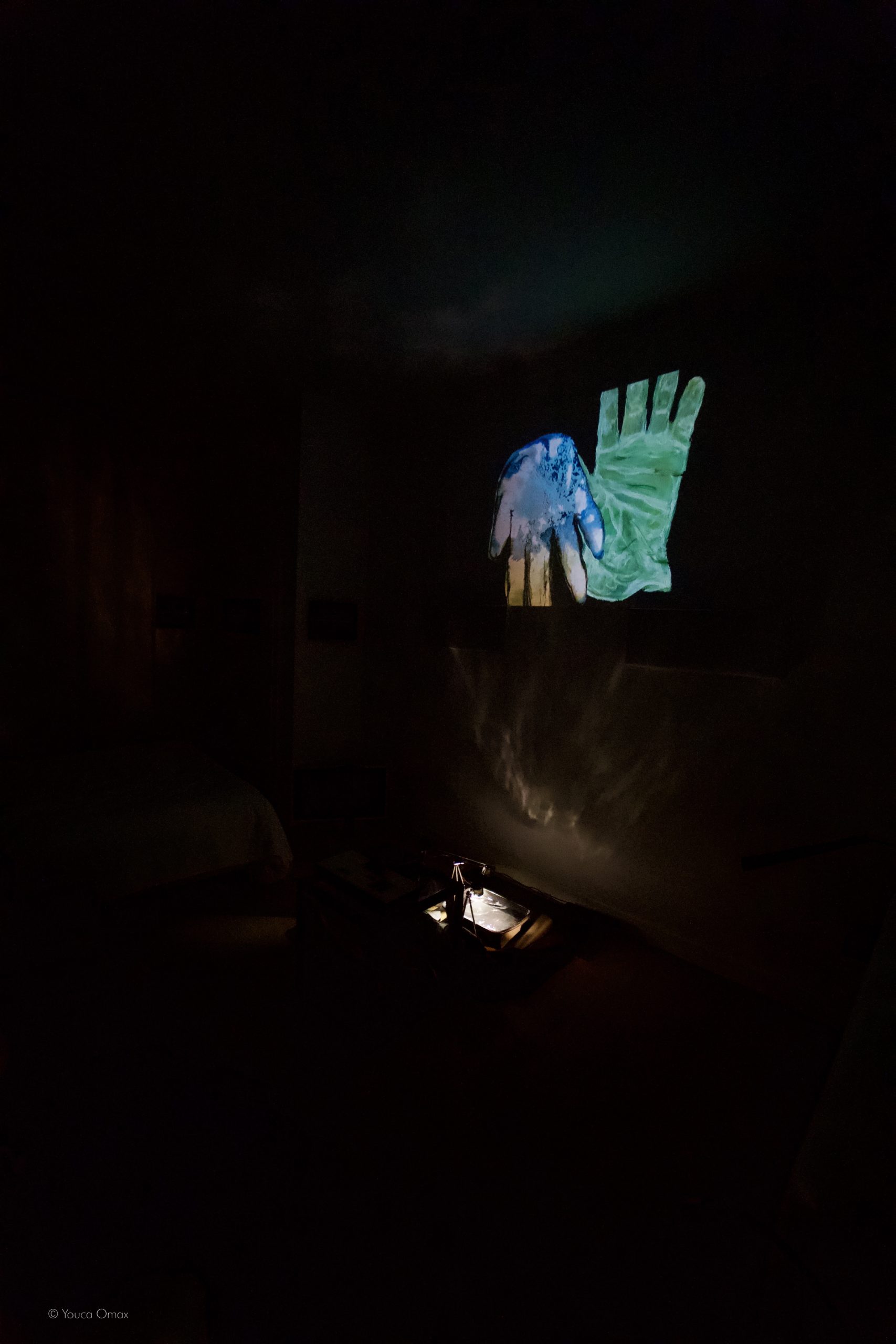 My artistic residency at the WindsoR Hotel Nice

« A month before the lockdown, I found myself in an artistic residency at the WindsoR Hotel in Nice, invited by OVNi and Odile Redolfi, thanks to the association Act by Art.

At the WindsoR hotel, I first settled in room 42 (created by Robert Barry). In room 508 on the top floor, with my eyes open to the sky, I worked under the roof, at a safe distance from everyone. The first thing that fascinated me was the light. Right away I understood why so many painters have travelled south!

In the first week of my visit, I visited all the museums in Nice so that I could then shut myself away to paint. At first I was re-drawing gloves and the nightdress, leitmotifs that often recur in my work. One of my first finished paintings was The Mimosas, it was during Carnival, and the Mimosa is, in my eyes, the emblem of the city, of this stay of light and brightness.

The azure blue began to come into my painting thanks to the contemplation of the Mediterranean. But I could not forget the horrors that this sea has experienced in the last ten years. I decided to make a series of paintings entitled Mediterranean. « End of All Hope »: a human project, a necessity, dedicated to everyone whose dream has ended in the Mediterranean. I then started the polyptychs, a common process in my work. I didn’t know if I would be able to finish this set or not. Indeed, the residency normally ended mid-March…

The unthinkable, the ‘science fiction’ film as I imagined it, became a fact when we started talking about Covid-19… followed by the lockdown. I wanted to be locked up to paint, but being locked up by obligation, as everyone in this period, was beyond imagination! I was in the hotel at the time and Odile offered me to stay.

So I found myself confined there and paradoxically I never had so much space to work. Suddenly I had 57 rooms to myself, which is extraordinary and frightening! The hotel gradually emptied. I was neither psychologically nor materially prepared, because I didn’t have enough painting material to continue my painting project. I came with a suitcase for a month, the hotel rooms are not a « studio », I put my supports on the floor and not on an easel. Fortunately, I found a shop where there was Arches paper, the beautiful papers on which I like to create and which allow me to use mixed techniques as I have always done them. So I continued my series on the Mediterranean, without being able to go to the sea, which was off-limits during the whole period of the lockdown.

At the time of the confinement, Odile suggested that I change rooms. I lived in room 8, on the ground floor, with a terrace overlooking the garden where a painting by Konstantin Sgouridis hangs. Despite the beauty of the place, I lived there at first with a bit of a sense of dread, alone in the five floors, it takes time to feel at home and to get used to the place, everything was incredibly quiet… Empty. Fortunately, Bernard Redolfi has returned from his house in the country; he is staying there on the fifth floor, next to my studio room. My anxiety gradually dissipated, but the news was constantly causing anxiety.

Odile, who lives right next door to the hotel, had not revealed to me the treasures that this vast residence concealed, the subject had barely been touched upon and had encouraged me to discover it. One day, at the end of March, I was in total recollection and solitude, I took the pass and started to open the doors of the 57 rooms. A whole world began to open up at the threshold of each closed space. No room is like another, often invested by a selected artist, is imprinted with his art, becoming his room. Rooms charged with the personal histories and worlds of these artists, they offer an experience of contemplation, of the confrontation of an inhabited work-place. The living work is quite different from the work presented in a museum or gallery. Instead of remaining at the stage of vision, to live here is to live « inside » the work. We are faced with the first functionality of art: living in the intimacy of one’s own room, even before the concept of a museum.

It was at this moment of discovery that the history of the place gradually began to unfold before my eyes. You have to experience what it is like to enter these rooms as works of art. I had mixed feelings between enchantment, disorder and surprise. In some of them I could hardly imagine myself sleeping, in others I felt a place of welcome. You have to dare to do such a project, utopian, where the question of art is far from being a simple decoration to celebrate the « beautiful ». Here I salute Odile and Bernard Redolfi for their audacity and generosity. With gratitude, I led this stay of confinement on a large scale, painting daily despite the difficulties of each day. During my artistic residency in Nice, unique, I was able to produce works whose format varies, as always in my work, from several meters (in this residence the largest is 6 m long) or does not exceed 7 cm. The techniques are often mixed.

I can only end here with this « Invitation to travel » by Baudelaire at the WindsoR because everyone will cultivate their own dreams of discovery, by putting down their suitcase in this place of rest, by having their own experience… Living confined in a hotel remains exceptional! Travel and discovery are an integral part of my life. But, I prefer to speak here of wandering. Leaving is my destiny, it is a need.

There, all is order and beauty, Luxury, calm and voluptuousness! »